Leavenworth Yoga first opened its doors in 2010.  At the time, there were no yoga studios anywhere even close to Leavenworth.  A few gyms offered yoga classes but there was no dedicated space that was designed for the practice of yoga.  Yoga was still on the rise as a wellness and fitness option in the Midwest so there was nowhere for the yoga practitioner to go in Leavenworth to find a committed and calm space to engage their practice and there was nowhere for the yoga beginner to go where they could be assured that all instructors were certified and knowledgeable in their craft.

Need and desire came together and Leavenworth Yoga was the result.  Originally opened as Leavenworth Yoga Co-op, the studio brought together the best instructors in the area and outfitted the space at 521 Delaware with all the necessities for a consistent, reliable, and healthful yoga practice.

The current owner, Robin Krasnesky, began as an instructor with Leavenworth Yoga in 2011.  When the opportunity presented itself for Robin to purchase the studio, after much discussion with her Chihuahua, Lola, Robin made the decision to move from instructor to owner.

Leavenworth Yoga is the primary yoga studio in the Leavenworth County area and has developed a reputation that brings in students and instructors from all of the surrounding areas, including the KC metro. 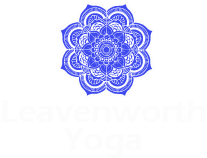